Kannur Temple Visit : We provide opportunity to visit famous temples of Kannur in one day! The pilgrim starts at early morning 5am and cover all below temples in Kannur and drop you at Kannur bus/railway station by evening. We provide accommodation for previous night

There is an interesting myth connected with the origin of the temple. It is believed that the idol consecrated here is the very idol worshiped by Sathyabhama, the consort of Lord Krishna at Dwaraka in Dwapara Yuga millenniums ago. One day it happened that she failed to notice her husband standing near her as she was immersed in performing pooja to the idol. The Lord got furious. He kicked the idol off the pedestal. It flew and fell in the nearby sea. Its right hand was broken. Time and Tide took the idol to the Kannur sea belt. A fisherman happened to net it. It being a precious catch, he presented it to King Valabhan, the Kolathiri King ruling over the area more than thousand years ago.

This temple is located at Parassinikadavu, 20-km from Kannur town. The deity is Muthappan
The mighty deity is very powerful to solve the problems of the devotees. People intending to start new business come here before starting it for blessings for success and give offerings. Large number of devotees visits the temple.

25-km north of Kannur on NH 17 in Taliparambu. Its inception dates back to 10th century. The murals inside are faded. The carvings and the murals are worth observing.
A 14-day festival called Trichambaram Mahautsavam is a great draw. The festival is in March.

The temple is located at Kanhirangad, 6-km from Thalipramba, on a hill top. The main deity is Shiva, facing east. Here the deity is self-incarnated and as the name (Vaidyanatha) implies, the deity is a celebrated Ayurvedaphysician. Bhagawathy, Ayyappan and Ganapathy are sub-deities.

This shrine is situated at Thaliparambu, 23-km away from Kannur town, on NH 17. The deity is Shiva.
In no other temples in Kerala Shiva is known as Rajarajeswara. The devotees call the Lord here in some pet names also – Perumthrikovilappan, Perumchellurappan, and Thampuran Perumthrikovilappan.
The deity Shiva here in the form of Jyothirlingam is three time more powerful in divinity than any other Shiva temples. The legend for this extra ordinary phenomenon is of interesting read.
While the Sage Parasuraman who is the incarnation of Vishnu visited the shrine it was in bad shape. The pained Sage researched on the cause. At this stage Sage Narada appeared and explained the core reason for the pathetic condition of the temple. Sage Sankara and his company were churning the disk of the Sun so as to minimize the impact of heat. The dust formed from grinding was mixed with Amrith, the divine nectar for immortality. From the mix they shaped up three shining Shivalingams (Jyothirlingams) and presented them to Lord Brahma. After a long while, Brahma entrusted the same to Parvathi, the wife of Shiva. Parvathi, in turn, gave them to three Kings, one for each. Out of the three kings, Maandatha was of Thretha Yugam, while the other two Muchukundan and Shathasoman were of Dwapara Yugam. Thretha Yugam and Dwapara Yugam are of two different ancient periods according to Hindu mythology.
The idols were given by Parvathi on a specific condition that they should not be installed at places where no death of any lived object has taken place nor the body of any dead object has fallen.
The long search landed Maandatha at a small obscure place where a Thalika (a metal dish-plate) can be accommodated. Maandatha put the Shivalingam in a plate and installed. The place thereafter came to be known as Thaliparambu. The idol, after some time, disappeared and the place became vacant. The place however became shining and divine.
The King Muchkundan who was in search of a place befitting to the nomenclature prescribed by Parvathi landed at the spot, after failing to locate a place, where Maandatha had installed the Jyothirlingam and installed the Jyothirlingam in his custody at the spot. This too vanished after some time. But the place became doubly shining and doubly divine.
The third King Shathasoman who received the third Jyothirlingam from Parvathi also landed at the very spot where two installations were done in search of a suitable spot fitting to the module prescribed by Parvathi. He too selected the very spot as he could not locate any other place and installed the idol in his custody. This idol started sinking into the earth. The perturbed King immediately started praying to Sage Agasthya. Responding to the prayers, the Sage appeared and the King narrated the event. The Sage lighted a ghee-lamp and prostrated 12 times before the idol and half-way on the 13th prostration the idol stood firm on the ground. The sacred spot thus became three-fold divine and there-fold shining. The devotees started pouring in. Sage Narada narrated the event to Sage Parasurama who constructed a temple there.Sage Agasthya appeared in the temple premises and made Abhishekam (ceremonial washing) on the idol. The Sage also lighted a ghee-lamp which flares non-stop all these years. The ghee required for the lamp gets as offering from the devotees. The sanctum sanctorum is two-tiered and shaped rectangular. It has four doors, one at each side. Parvathi is seated on the west side of the sanctum sanctorum. The door of Parvathi’s shrine is kept closed always. Before visiting Rajarajeswara temple a devotee is required to visit and worship Lord Krishna in Vasudevapuram temple. This temple is located on the southern bank of the big temple pond of Rajarajeswara temple. This is a custom and tradition. Again, before worshipping Rajarajeswara a devotee is required to worship Sree Bhoothanatha (Kumbodharan) at his shrine. Rajarajeswara and the deities of Trichambaram (Lord Krishna) and Kanhirangad (Sree Vaidyanatha) are inter-connected and administered by a single authority, Thaliparambu-Trichambaram-Kanhirangad Devasom

Located at Payyannur, 21-km north to Thaliparambu on NH 17. Pavithra mothiram – sanctified ring – made with gold and holy darbha grass is a speciality here. The Brahmins used to wear such rings during rituals. The ring is made outside on order and sanctification is done in the temple. It is believed, wearing this ring, evils ward off. 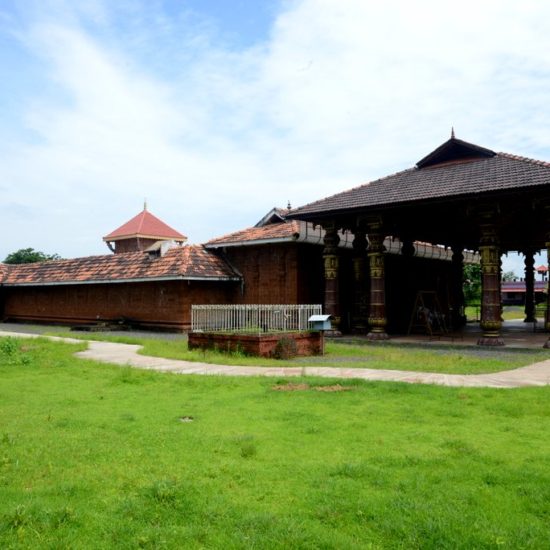